Update: The much anticipated release of the iPhone Pwned Tool by the iPhone Dev Team, for unlocking the Apple iPhone has been suspended.

The “DevTeam” would like to announce the immediate withdrawal from the iPhone development arena.

It was anticipated that the DevTeam would be releasing a tool for the iPhone sometime this week. Unfortunately, it has been decided to withdraw all development activities on this tool.

Criticism of the validity of the tool has been reported in the press and certain actions were taken to prevent the release of the tool on the 30th March.

Due to these actions, certain developers ceased their work immediately, with others reconsidering their position.

On Monday the 31st of March the DevTeam was approached by an unnamed party to sell all of the Intellectual property and related applications.

After much consideration, the offer was accepted and work has ceased.

The name of the company that has made this offer is private, and the details of the deal are confidential.

Our only comment is that Pwnage Tool and other such applications will not be seen outside of the lab.

We would like to thank our users for their support over the last 10 months. 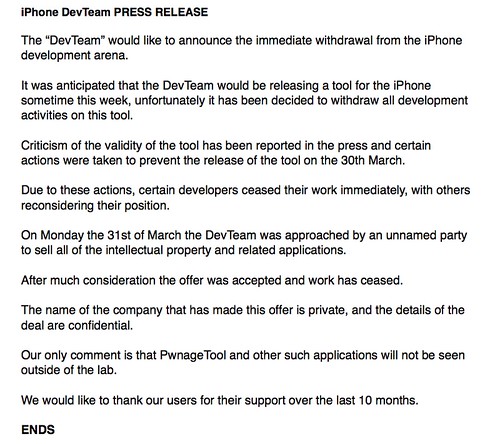 In case you were wondering of what was supposed to come out, the one stop unlock the Apple iPhone software, check out the video below