There’s no better place to observe how government works than in the White House. The excitement of being in the White House complex and observing the daily workings of the executive branch is incredibly rewarding, if not always as glamorous and tawdry as the news would have you believe.

I spent the summer before my junior year as a White House intern. Unlike many Washington interns, my assignments were meaningful and interesting and I was a valuable part of the team in my office. Better yet, I was given time to attend special speaker events sponsored by the internship office and to explore life in Washington. I also met a wide range of incredible young people and spent a great deal of time discussing complex issues with them.

Not everyone’s experience was as good as mine. Some interns felt they were given too much clerical work, or expected to work the same exhausting hours as paid staffers in their offices. The experience varies greatly depending on the office to which you are assigned; it’s best to talk to former interns before you apply.

Applying for a White House internship isn’t a difficult process – it just takes a sharp cover letter, a resume a one-page essay and three letters of recommendation to get your foot in the door. True, not all applicants get in by merit alone (unless you count well-connected parents and friends as personal achievements). Powerful people can do wonders for your prospects, but they’re not required.

* At least 18 years of age on or before the first day of the internship
* Enrolled in an undergraduate or graduate program at a college or university, or graduated the previous semester
* A U.S. citizen

Completed application materials must be submitted to Karen Race, Deputy Director and Intern Coordinator in the office of White House Personnel, at [email protected] prior to the following deadlines:

Upon acceptance, candidates must consent to a security clearance prior to their start date and a random drug test. All security measures are confidential and intended to protect the applicant as well as the Executive Office of The President. 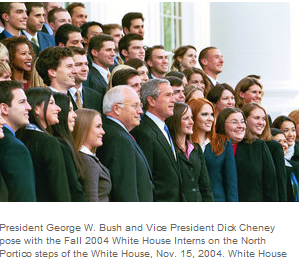 I couldn’t tell you the exact proportion of candidates who benefit from such networking (I’ve heard as high as 90 percent, but my closest intern friends and I compared notes and found we all just sent in essays and crossed our fingers). I have a feeling a lot of that is rumor. Besides, even those who did benefit from connections often had such impressive political internship experience that they would have been accepted “on their own,” I’m sure. So the myth that you must have connections to be chosen should not deter you from trying.

Setting aside the well-connected applicants, there are certain things the internship office looks for in each application.

It helps to have some substantive experience on your resume, but the amount expected varies according to your age. Interns range from freshmen to seniors, though many are juniors. The program directors look for demonstrated interest in politics – but based on the different kinds of experience my fellow interns had, there’s no minimum requirement.

In high school I volunteered for local politicians and I was politically active on campus, but I had not spent any time working or volunteering in Washington. Other interns had worked on international issues in the U.S. and abroad, and many studied political science or government in college and interned in that field while at school. But there were also interns who looked at politics through the lenses of other fields. In my case that was economics, but others were majoring in literature, sociology and psychology.

Many interns had worked previously in D.C. at government agencies and non-profit organizations. Quite a few had also been congressional pages. Still, inside-the-Beltway experience isn’t necessary.

Stay away from the tactic that someone I know used. He included his extensive Democratic political involvement on his resume, and used his essay to argue that, hey, political experience is political experience. He was turned down. The current administration likes students who are flag-waving Republicans – with a big R – and the more gung-ho, the better.

The other part of the application is the essay. It should be a short, one-page summary of your political passions, hopes and dreams. I wrote an impassioned little piece that might make me laugh if I read it again now. The White House seems to like that approach; I get the feeling that the internship program prides itself on collecting little group of patriots. Remember, though, they have to read thousands of these essays. So be concise, be clear and avoid making yourself out to be someone you’re not. They will see right through that.

The good news is they don’t give interviews, so you don’t have to worry about impressing anyone in person – yet.

On the application, you can indicate four offices to which you’d like to be assigned. However, if you’re accepted, be prepared to work in an office you did not list. With hundreds of interns attending each session of the program, it is impossible for the internship directors to give everyone their exact choice. For the most part, though, the White House was incredibly eager to make every intern’s experience rewarding, and almost all interns I met were happy with their specific assignments. Just don’t expect to be in close proximity to the President most of the time. The majority of interns actually work in the Old Executive Office Building adjacent to the White House, and only see the President once or twice.