Everyone needs somewhere to call home, even for the summer Intern. 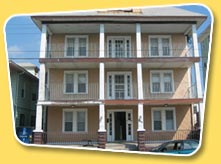 It’s almost May and you’re sitting in your dorm room daydreaming of a perfect summer job far, far away from home. The money is going to be great, there will be so much to see and do, your friends will visit and oh, wait a minute. That’s right, you don’t have a place to stay, yet, do you?

Don’t worry. AskStudent.com can help you find a place to crash this summer, no matter where you’re working. The clock’s ticking, so let’s get started.

If you’ll be living in a city this summer, there are a number of ways to find an apartment without leaving your dorm room. By turning on your computer and logging on to the Internet, you can find summer rentals anywhere in the country on Web sites like Apartments.com and RentNet, says Manny Clark, assistant director of housing at the University of Minnesota.

If that doesn’t work, Clark suggests checking out local universities and colleges in the area you’ll be working-specifically. Off-campus or commuter student housing is often made available by students who have a yearly lease, but go home for the summer. A lot of Universities, have student forums. So you can email someone working for the university and if you ask nicely, they might be willing to send out an email on your behalf.

Clark says the University of Minnesota is willing to review subleasing contracts for students to make sure they aren’t getting taken. “We try to look at it and make sure they’re not paying more than they should or getting hit with any surprises,” he says.

Clark’s final suggestion is a practical one, depending on where you’ll be working: Try to stay in a college dormitory in the city. He says some schools don’t allow it, but by checking around, you can save hundreds of dollars in rent each month, plus it may come with such amenities as a meal plan. “There’s difficulty in going to a city,” Clark says. “If you’re not familiar with the city and your surroundings, it can be scary, especially if it’s your first time away from home.” As an example, New York University and Columbia University are offering summer housing for students who are not enrolled in their summer program in New York City.

If you belong to a Fraternity or Sorority, look for a local chapter in the city of your internship. They might be more than willing to accomodate a brother. 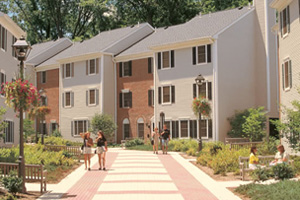 Most resort towns don’t have unlimited college housing. According to rental agents, however, there are plenty of apartments and houses available this summer. “They need to start calling us now, though. The sooner, the better,” says Daria Avila, a rental associate with Carey, Richmond & Viking in Newport, RI. “They do go quickly.”

Here’s some bad news. It can cost a lot of money to spend the summer where the rich and famous spend their vacation. How much? Try $1,000 per bedroom, per month for an average Newport apartment. Oh yeah, and one other thing, if you want to get a place with a bunch of friends, there’s more bad news for you – some cities, Newport included, don’t allow more than five unrelated people to live together.

You need a good rental history; most agencies will check your credit report to see if you’ll be a good tenant. Don’t worry too much about it, though, advises Avila. “If you’re late on a Visa payment, that’s not enough to stop them from renting. We’re looking for a pattern of bad credit,” she says.

But, all things considered, the college students and twentysomethings who populate places like Newport each summer say the expense of resort towns is worth while. There’s the ocean right outside your door, plenty of places to eat and (especially) drink, ride your bicycle or go for a walk. You’ll find more college students standing in lines outside Thames Street clubs on a Saturday night than anywhere on your campus other than dining hall.

Right about now, you might be thinking, “OK, there are places for me to stay when I get there, but how do I find them?” Those staying in Newport this summer can email Carey, Richmond & Viking. For the rest, you need to start googling them up.

For those of you headed to a resort town other than Newport, all you need to do is call a few rental agents in your destination of chouce. Most companies will send you an application asking you the number of people looking for an apartment, how much you’re willing to spend, and the dates you want to move-in and move-out.

If you give them a phone number and email address, they’ll send you digital photos of the apartments available. You have to act quickly however, Avila says, or else you could lose the apartment. It helps to have your summer job lined up before filling out the application, Avila says, so the agency can verify your employment.

Avila says students shouldn’t worry about finding a place, though. “It should be relatively easy as long as they start early,” she says.