Before you cast your resume upon the online waters, remember that there is no substitute for personal communication […]

Does life seem incomplete without your ex around? You must be thinking about how to get ex back, […]

14 people killed in shooting at Colorado Theater at the screening of The Dark Knight rises. Get the latest updates and video of the shooting aftermath

Share “ As Apple’s profits have soared, their taxes have stayed about the same. Staggering image http://nyti.ms/IAgV3T Explained […]

It is Google’s policy not to censor search results. On the other hand, in response to local laws, […] 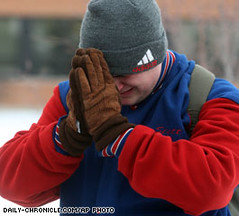 At approximately 3 p.m. Thursday, February 14, 2008, a gunman, carrying one shotgun and two handguns, opened fire in a geology class at Cole Hall on the campus of Northern Illinois University in DeKalb.

NIU Police officers were on the scene in less than two minutes and the gunman was found dead of a self-inflicted gunshot wound a short time later. Police have not released the identity of the gunman. At this time, there is no known motive. Campus Police Chief Donald Grady also confirmed that the gunman was not a student at Northern Illinois University.

Eighteen students were transported to Kishwaukee Community Hospital in DeKalb.