Oral sex can be just fabulous. It’s something that should be celebrated and enjoyed fully. So if you’re going to go down on a woman, don’t just do it — do it right.

You can’t wave your tongue in the direction of a woman’s private parts and expect her to convulse in a mind-blowing orgasm then fall to her knees thanking you. You don’t need to be a box gourmet to chow it delightfully — while there is skill involved, being tuned into a woman’s mood and sensations is more important than all the strength your tongue can muster.

Ease in
First things first: don’t just yank down her cute little panties and have at it. “Don’t rush it,” says Brooke Matteo*, a junior at Dickinson College. “It’s a very sensitive area.” In other words, she says, give the rest of the body some attention and make a “slow prelude” to the big eat-vent.

When you finally get down there, don’t hurry. “Start out slowly and build up the speed as you go,” advises Melissa Wayner, a recent UNC-Wilmington grad who currently works as an animal trainer in Charlotte, NC.

Make contact
Oral sex is pretty intimate, but it becomes even more intimate when there’s plenty of physical connection between you. Don’t just lie and lick; stroke her thighs or hold her around her legs, Melissa says.

Also, don’t hide in her silky depths. Look at her. Make eye contact, at least occasionally, to see how she’s doing and so she can see how you’re doing.

END_OF_DOCUMENT_TOKEN_TO_BE_REPLACED 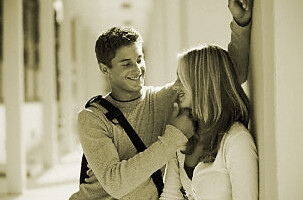 The first time, a.k.a. losing it, being deflowered, breaking the seal, losing your innocence, popping the cherry — there are lots of names for it. But when you’ve decided to have sex for the first time, the names don’t matter. What matters is being ready and having some idea of what it’s all about.

When the big day (or more likely, night) arrives, no matter how you set it up — with candles, champagne, and sexy lingerie, or as just another night — it’s bound to be more exciting, and at least a little more nerve wracking, than your standard hook-up.

So do yourself a few favors. First, have protection ready. There’s enough to worry about without having to add concern about contracting an infection or dealing with a pregnancy. If you don’t have a supply of condoms, go get some. Frank Littlefield*, a senior at Boston University, remembers making a fast trip to the store on his first night. He was at a friend’s house for a holiday party. When he discovered both he and his (also virginal) partner were latex-less, he “ran to the drug store. I grabbed one of those 75-cent single packs, and sprinted back. She was waiting for me.”

Next, get in the mood. This is supposed to be fun, so relax and enjoy it. Turn on some sexy music, and then it’s time for — hey guys, are you paying attention? — foreplay, foreplay, foreplay. The more excited and worked up you both are, the easier and smoother the whole thing will be.

END_OF_DOCUMENT_TOKEN_TO_BE_REPLACED

Are you and your mate looking for new and interesting ways to express your affection? Or maybe you and your significant other can’t keep your hands off each other, but are waiting before you plunge into intercourse. It seems that more and more young people are putting penetration on hold and seeking other ways to make each other feel good — without actual intercourse.

There are many reasons young couples decide not to jump right into a full-on sexual relationship: AIDS, pregnancy, and sexually transmitted diseases are high on the list. And many couples just aren’t ready. In fact, according to a recent Playboy survey, the number of virgins in high school and college is increasing. So what’s a couple to do if they aren’t having sex? Plenty!

Here are ten suggestions for spicing up your relationship without going all the way.

“When my last girlfriend and I met, she was still a virgin,” says Dirk Meeks, a recent graduate of UCLA. “She was kind of nervous about having sex, but loved it when I touched her down there. I wanted to be sensitive to what she wanted, so we really got into a groove, not going further than that for a while. But it was cool to be able to get her to have an orgasm without pushing her to have sex.”

END_OF_DOCUMENT_TOKEN_TO_BE_REPLACED

“I was having a hard time coming up with enough money for food and rent. I found out selling sperm is pretty easy, and at 40 bucks a whack, it’s pretty lucrative too,” said the University of Oregon senior, whose name was changed to protect his privacy.

Salkin is one of thousands of college students nationwide who cover their expenses by selling DNA. Commercial sperm banks, which exploded in the early 1970s and now number more than 150, have clustered around universities where the “natural resources” are plentiful: intelligent people who need quick cash and have sperm to spare. By 1993, frozen sperm was a $164 million a year industry, and companies like California Cryobank were aggressively recruiting on the campuses of brand-name schools like Harvard, MIT, Stanford and the University of California at Berkeley.

“At least 90 percent of our donors are college students,” said Melonee Evans, California Cryobank’s client relations manager. “Students are more eager to donate because they need the money and have more flexible schedules.”

Those who can make the time and the maximum donation, which usually means siring up to 10 children can net upward of $6,000 in one academic year.

“Most students do it because they really need the money,” said Geo Low, an employee at Berkeley, Calif.’s Reproductive Technologies, Inc. “And some think their genes are cool and want to spread them around.” According to Low about 15 students make “deposits” to her bank on an average day.

Students at top schools say they can hardly walk across campus without finding ads soliciting donations from the young, brainy and virile.

END_OF_DOCUMENT_TOKEN_TO_BE_REPLACED

Phermones might put love in the air even if sometimes, it stinks

While surfing the Internet one day, I ran across an ad for The Scent, a pheromone cologne for men. The ad says it’s a “perfectly legal sexual stimulant cleverly masked in a men’s cologne that, when unknowingly inhaled by any adult woman, unblocks all restraints and fires up the raw animal sex drive in every woman.”

After reading that, I just had to find what this stuff was, if it actually worked, and if so, whether they made some for women.

American Heritage Dictionary defines pheromones as “a chemical secreted by an animal, especially an insect, that influences the behavior or development of others of the same species.”

According to pheromone perfume merchant Gary Knapp, the owner of the Portland, Ore. adult bookstore Crimson Phoenix, animals exude pheromone scents for various reasons. “We give off scents when we are in a state of fear,” Knapp said. “The idea that animals can smell fear is not wrong.” The pheromone perfumes at Crimson Phoenix are used for the purposes put forth in The Scent’s ad; attracting romantic interest. Their line is all-natural, oil-based perfumes with pheromones in them, what Knapp calls “fragrance oils spiked with pheromones.”

END_OF_DOCUMENT_TOKEN_TO_BE_REPLACED

Funny show called “The G Spot”. Oh, and look at the hosts

Take a look at this picture below and jot down that first thought that comes to your mind. […]