An outstanding and amazing soccer video. Watch closely where the soccer balls ends up towards the end of the video

What is unique in Rhain Davis case is that he was signed by Manchester United after his grandfather sent the Premier League Champions a DVD showcasing young Ryan’s talents who by the bay has also become a YouTube sensation.

Rhain Davis who was born in England but has lived in Australia since he was four is already being hailed by the British media as the next Wayne Rooney the phenomenal English striker.

The boy’s dribbling and goalscoring prowess for an Under-10 side in Brisbane, Australia, feature in a four-minute YouTube clip shown below

END_OF_DOCUMENT_TOKEN_TO_BE_REPLACED

Robert Kubica F1 crash at Montreal GP in Canada in 2007. That was absolutely spectacular ! I was […]

How to Play Rock Paper Scissors

The two players count out loud to three or call out Rock! Paper! Scissors! each time raising one hand in a fist and swinging it down on the count and at Scissors! the players reveal their call using one of the three gestures. Remember the fist comes down each time one of the words is said out and the gesture is made on the third count after the players say Scissors. Sometimes players employ the word shoot! which is the fourth word said and reveal their gesture then.

Rock: The gesture rock is represented by a closed fist

Paper: The gesture Paper is represented by an open hand as shown below

Scissors: The gesture Scissors is represented by the index and middle fingers extended as shown below 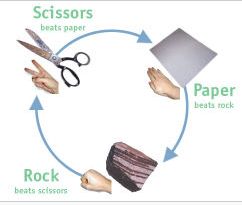 END_OF_DOCUMENT_TOKEN_TO_BE_REPLACED

The men’s basketball rules committee approved a measure Thursday that would move the 3-point line back one foot in 2008 — from 19 feet, 9 inches to 20 feet, 9 inches. If approved by the playing rules oversight committee on May 25, it would mark the first major alteration to the 3-point shot since its adoption in 1986-87.

Chairman Larry Keating said the committee considered two proposals. The other would have moved the line to 20 feet, 6 inches, the same distance as international 3-pointers. Both are shorter than the NBA line, which is 23 feet, 9 inches at the top of the key and 22 feet at its shortest point in the baseline corners.

“We made it a point to come up with a distance that was correct for us and that didn’t necessarily mimic the international line,” Keating said.

The reason for delaying the change until November 2008 is money. Keating said it was unfair to charge schools a surprise expenditure when most of the budgets for next year have already been approved.

END_OF_DOCUMENT_TOKEN_TO_BE_REPLACED

Below is the NFL’s 2007 prime-time television schedule, as will be seen by the whole country. The regular […]