All times are US/Eastern

END_OF_DOCUMENT_TOKEN_TO_BE_REPLACED 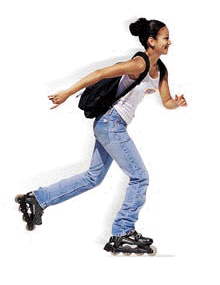 Inline skating — also known as rollerblading — is great exercise and a quick way to get around. According to the American Council on Exercise (ACE), an hour on skates burns almost as many calories as running. It also strengthens the muscles and connective tissues surrounding the ankles, knees and hips.

Plus, it’s a great way to enjoy being outside — as long as you wear protective gear and don’t crash into large objects. And unlike other sports on wheels (biking, race car driving), inline skating doesn’t require a huge investment. You can pick up a decent pair of skates for $100 to $200, which isn’t exactly pocket change, but it’s a whole lot less than the several hundred you’d spend for a new bike.

When buying skates, finding a good fit is extremely important. “Make sure the boot of the skate is comfortable,” says Joyce Buckley, certified in-line skating instructor. Take note of any pressure spots. If skates are uncomfortable when you try them on, Buckley says, don’t expect them to break in.

If you’re not sure whether inline skating is for you, “A good solution is to rent skates — the [protective] gear comes with the rentals — and try it,” Buckley says. If you decide to buy and you’re on a limited budget, she recommends shopping around. “Look for shops that will sell you their last season rentals at a low price.”