Like.com promises to be the next biggest thing in search. So, how is like.com different than any other search engine. Like.com is a visual search engine, allowing us to search for items by their appearance, rather than just text. Their theme could have been ‘A picture is worth a thousand words’ and it would be so true.

A lot of you might have been well aware of Riya. Riya was one of the first darlings on the web 2.0 world. It lauched with the objective to make facial and object search as simple and easy to use as text search.

What Riya used to be? Riya’s original theme was to use face recognition to make personal photos identifiable without explicitly tagging them or using labels. Riya’s method proved to be so popular that to date, they have over 10 Million photos uploaded by users in around 7 months. Comparing them to the most popular photo management and sharing application right now, Flickr took around 2 years to hit its 10 Million photo mark.

So what algorithmic prowess powered Riya? Riya performed its image recognition tasks based on a learning system which probabilisticly just learns whether the face is right or wrong. Keep feeding the system examples and achieve a base line to determine whether or not the answer returned matches the query performed. It also used contextual recognition to identify a face based on their nose, jewellery, clothes etc.

The switch from Riya to Like.com: According to Riya’s CEO Munjal Shah, where riya.com represented the company web 1.0 effort, like.com is their web 2.0 front. One of the reasons for their switch was that riya’s customer base did not search their own photos everyday. An equally important reason was that riya1.0 did not allow them to make any money out of it. Hence when they switched to like.com, they are focussed on products which together constitute a $30 Billion online market.Imagine the power to be able to take this industry to a whole different level by allowing people to search for exactly what they want and not just describe what they want as they do through any other search engine.

Motive behind like.com and how Riya managed to acquire it. Like.com is being built as a visual search engine, looking for things that are similar. Like.com fits the bill perfectly. As expected, like.com was not a domain that was freely available. In order to acquire this domain, looking up the owner through whois or emailing him did not work. So they tracked him down to his address, left a nice bottle of champagne along with their contact info. That seemed to have done the trick as the guy calls Riya back and bought it out for $100,000. Other names which Riya considered for their new initiative was better.com which was being quoted at $450,000. In the end, like.com it was. This is a pretty smart move too with respect to search engine rankings as any query you type in say ” I really like the Halo Master Chief costume” and you can be sure, like.com would be right up there with an answer to your query.

So, what is like.com. What are the brains behind it.. and what about the people behind this brain? Like is a visual search engine, the first on the web, where you can submit a photo as your query. Right now, for their initial launch, the search works best for aesthetic products such as shoes, shirts, jewellery, handbags. This is a feature lacking in most of the search engines out there as it is something that can’t be described in text… stuff with designs, china patterns in anything less than a paragraph. They are launching with about 200 merchants such as Amazon, eLuxury, ice.com, ShoeBuy, Zappos etc and about 2 million unique products. However, expect this number to significantly grow within the next couple of weeks. They are launching with 1000 cores or 250 servers with 16Gigs of RAM on each of these machines to handle the tremendous amount of image processing. This huge amount of processing power is needed because like also lets you dig into more details of a picture which compare a section of the visual signature of each product and then compare it against other sections of each product. Say, you like the buckle of a handbag, you can then go search for other similar handbags which have that kind of buckle. Also, when people start uploading pictures for comparison, image quality does matter. The system also has a full text based search engine too, you can drill down by brand name too if you so desire.

1. To perform all of this computation, Riya had about 14PHds to develop the core algorithm and another 20 Engineers to build the product.

2. All of their coding is done in C++ for the core algorithms and Java for the backend.

3. When Riya’s Software engineers tried to convert the math algorithms to Java, the speed was 6 times slower.. surprise. Apparantly C++’s math libraries and its ability to churn out matrix multiplications or linear algebra in a superior fashion did the trick.

4. Like.com is totally free and they get paid when you click through the item and purchase something or cost per action. They also make money through the traditional CPC or per click off a product. What this means is that they are making money as an affiliate of these retail sites, meaning it gets paid about a 10% commission on a sale to a customer it sent to an online retailer. So, Riya found its business model in fashion.

5. Like.com is advertising free… so you won’t find any Google or Yahoo ads in there.

6. Riya’s web crawlers indexed the highest resolution pictures from the merchants first so as to allow their customers to further drill down into a picture for any patterns they might be looking at.

7. Each picture uploaded into like’s database has an average size of 10k. So if you take at the 10Million pictures uploaded, that would be about 100,000 Gigs or about a 200×200 GB HDD on each server at least. And plus, you have to allocate for further growth.

8. Like’s face similarity operation failed while their algorithm performed extremely well for shopping. Hence they went with a focus on shopping where the user expections are such that they can succeed and through their user testing, they concluded that their face detection might never be good enough.

9. One of the company’s mottos: “Go where the ball rolls downhill ”

10. Before like.com rolled out, 95% of the people who used riya.com were men. With like.com they are focussing on Jewelry, handbags and clothing a multi billion dollar business and targetting women between 20 to 30 years old.

12. Riya came pretty close to bring bought out by Google 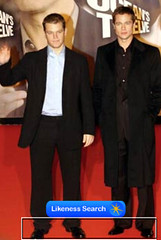 An example Say I like Brad Pitt’s watch in this picture. Once you click on the ‘likeness search‘, which is basically a search by appearance and it finds things that look similar.When a user performs this search, like looks at the Shape, texture, color and other 20 factors that are details like sheen, color gradiant, glossy or shiny.. all of which gets converted to a visual signature for the shoe which is encoded into a 10k vector for each shoe. All these 10k vectors are then compared within the limited time to produce the results for the user.  Each of these 10K vector images consist of about 5000 numbers. The “likeness” algorithm determines the order of the results based on the shape, color and pattern.  “We are extracting and computing the visual signatures and pulling out pieces for comparison,” Shah said. “The results will never be worse than a text search. We index all the metadata and even normalized some of it.”

Now, our search result for the shoes shown in Brad Pitt’s picture gives back over 5087 similar shoe results. You can then drill down based on what factors are more important to you. Using a slider, users can filter out the results to find the product they desire based on the color of the shoe,the shape of the shoe or the design of the original shoe in the picture. You can also pick based on your price range, a different color or a particular brand or from a particular merchant. Another neat feature is that you can drill down into something you particularly like in the original picture.

1. Like.com does not have an upload feature yet. So all you can do right now is browse through pre-determined images on celebrities and other products already uploaded and properly trained into Like’s algorithm.

What would be really neat to have…

1. The CEO of Riya and Like, Munjal Shah mentions that they are also working on a toolbar or browser extention, so that you can right click and submit it for a likeness search while you are surfing the web. A possible option would be work with browsers like flock which integrate photobucket and flickr into their browser. Working with these guys would give an added advantage besides building a cross browser web extension.

2. A smart phone/cell phone version or anything that is mobile and can take pictures and upload it and be able to find similar items like makes like the next killer application. A sample scenario could be you driving on the highway and see this really neat plasma tv on a giant bill board. You can always come back to your place and do a research on items you think might be that TV, but being able to take a picture of that plasma tv, and do a ‘likeness search’ for similar items with prices and opinions shown is killer.

More links to know about Riya and like.com’s launch and reviews

1. Video interview of Munjal Shah, CEO of Riya talking about Riya and like.com at Scobleizer

2. Product demo of like.com on Scobleizer