BLACKSBURG, Va. – A 23-year-old senior from South Korea was behind the massacre of at least 30 people locked inside a university classroom building in the deadliest shooting rampage in modern U.S. history, the university said Tuesday. 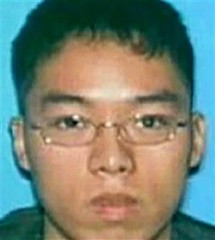 Ballistics tests also found that one of the guns used in that attack was also used in a shooting two hours earlier at a dormitory that left two people dead at Virginia Polytechnic Institute and State University, Virginia State Police said.

Police identified the shooter as Cho Seung-Hui (pronounced Choh Suhng-whee), of Centreville, Va., who was a senior in the English Department at Virginia Tech. Cho, a resident alien who immigrated to the United States from South Korea in 1992, lived on campus in Harper Residence Hall.

The bloodbath ended with Cho’s suicide, bringing the death toll from two separate shootings — first at the dormitory, then in a classroom building — to 33 and stamping the campus in the picturesque Blue Ridge Mountains with unspeakable tragedy.

‘He was a loner’
“He was a loner, and we’re having difficulty finding information about him,” said Larry Hincker, the university’s associate vice president for community relations.

Cho’s fellow residents of Harper Hall said few people knew the gunman, who kept to himself.

“He can’t have been an outgoing kind of person,” Meredith Daly, 19, of Danville, Va., told MSNBC.com’s Bill Dedman.

Students live six to a suite, said Stephen Scott, a freshman engineering student from Marlton, N.J., and do not necessarily know other residents.

Scott said police and FBI agents went through the dorm Monday night showing a picture of Cho and trying to find anybody who recognized or knew him. He did not know whether they were successful.
Scott said the prevailing mood among the students was one of stunned resignation.

“We’re confused, outraged, in disbelief. This is such a beautiful campus,” he said, his voice trailing off.

In Centreville, where Cho’s family lived in an off-white, two-story townhouse, people who knew Cho concurred that he kept to himself.

“He was very quiet, always by himself,” said Abdul Shash, a neighbor. Shash said Cho spent a lot of his free time playing basketball and would not respond if someone greeted him. He described the family as quiet.

South Korea’s Foreign Ministry expressed its condolences, saying that there was no known motive for the shootings and that South Korea hoped the tragedy would not “stir up racial prejudice or confrontation.”

Ballistics evidence points to student
Two law enforcement officials, speaking on condition of anonymity because the information had not been officially announced, said Cho’s fingerprints were found on the two guns used in the shootings. The serial numbers had been filed off, the officials said.

A law enforcement official said Cho was carrying a backpack that contained receipts for the purchase of a Glock 9mm pistol in March.

Col. Steve Flaherty, superintendent of the Virginia State Police, said it was reasonable to assume that Cho was the shooter in both attacks but that the link was yet definitive.

“There’s no evidence of any accomplice at either event, but we’re exploring the possibility,” he said.

At least 26 people were taken to hospitals after the second attack, some of them seriously injured. Twelve students remained in hospitals in stable condition Tuesday, officials said.

Bush to attend service
State, local and federal investigators spent the night collecting, processing and analyzing evidence from within Norris Hall, which housed engineering classes, offices and laboratories. The deceased were recovered from at least four classrooms on the second floor and a stairwell. Cho was discovered in a classroom among the victims.

All of the deceased were transported to the medical examiner’s office in Roanoke for examination and identification. The names of the deceased students and faculty will be released once all of the victims are positively identified and their families are notified.

President Bush planned to attend a memorial service Tuesday afternoon at the university, the White House said, and Gov. Timothy Kaine was flying back to Virginia from Tokyo for the 2 p.m. convocation.