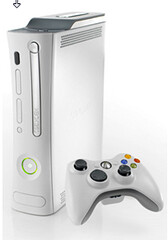 TechCrunch first reported that Amazon might be thinking of putting the $300 Xbox 360 bundle on sale for $100 in the next week or so as a promotional move just before the Thanksgiving Holiday Season. According to TechCrunch, they don’t know if this will be limited to just the hardware or the XBox or if it will include other items like a wired/wireless controller, or exactly how many will be put on sale.

Now, the $300 Xbox 360 bundle is the “core” model and does not contain the wireless controller(s), the hard drive, the HD A/V cables or the headset.

1. We believe that this might be for the original Xbox and not the Xbox 360 which would make perfect sense.

2. The rumor might be true as Microsoft might be trying to unload a large stock of unsold Core bundles.

3. If there is any discount, it might just be restricted to Amazon’s Japan division or residents of Japan only as Microsoft is trying to make the Xbox 360 more popular there.

4. Gears of War is out and people can’t wait to play the hottest new game on their Xbox 360. Is this a crazy rumor being planted by a Sony rep so that people would hold out on buying an Xbox and maybe … just maybe go buy a Sony PS3 instead!