Microsoft Corp announced that it will lower the price of its Xbox 360 video game console by about 13% or $50 beginning August 8th at retailers nationwide in the United States hoping this price cut will help attract the PS2 and the Wii fans and gamers ahead of the holiday season.

“As we look to the holidays we want to bring in more gamers and lower the price for those customers. We’re always trying to bring down cost of the box and … we always try to pass on the savings to our consumers. We feel like this is the right time to do it” said Aaron Greenberg,  Xbox 360’s group product manager

Another reason for the timing of the price cut of the Xbox 360 console is the release of Madden NFL 2008 on August 14th by Electronic Arts Inc(EA), the top selling video game of 2006 and the top selling franchise of the last 10 years. 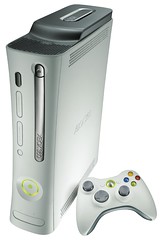 The price of the Xbox 360 Elite Model which features a 120 Gigabyte Hard drive and comes dressed in Black unlike the other consoles which are white in color will fall $30 to a price of $449.99

Also, for the Halo fans and the upcoming release of the greatest and biggest and most popular Xbox 360 game ever, Halo 3 in September 2007, the Xbox 360 Halo3 Special Edition Console will hit store shelves in September with an ERP of $399.99 (U.S.). Featuring an authentic Spartan green-and-gold finish, this console will include a matching Xbox 360 Wireless Controller, Xbox 360 20GB hard drive, Xbox 360 Headset an Xbox 360 Play and Charge Kit and more.

Launched in November 2005, the Xbox 360 has gone 20 months without a price cut, the longest of any console in history. Sony’s PlayStation 2 held its $300 price for 18 months after launching in the United States in 2000.

“The fact that we have been able to keep our launch price longer than any other console while retaining our leadership position demonstrates that consumers believe in the value of Xbox 360,” said Mitch Koch, corporate vice president, Global Retail Sales and Marketing Group, Entertainment and Devices Division at Microsoft.. “On the eve of the best holiday games lineup ever and the launch of ‘Madden NFL 08,’ there has never been a better time to jump into Xbox 360.”