In light of the upcoming release of Sony’s Playstation 3 on November 17th, and the imminent shortage that will ensue and to ensure that you don’t end up disappointed on the PlayStation 3’s launch day, site ps3seeker.com, has integrated an easy search method using Google Maps to come up with their very own customized maps that will denote all the locations where the PS3 will be available 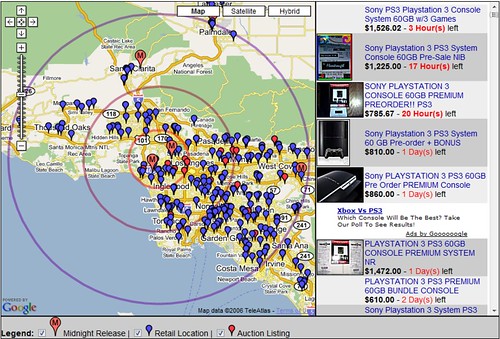 As you can see above, the site integrates Google maps pretty good. The legend is based on three factors… Midnight release, Retail Location and Auction Listing. Also, the pane on the right shows listings for PS3 on Ebay.
Simply type in your zip code into the search box below to see a list of local retailers, midnight release locations, and auction listings for the PS3 in your area.

Besides listing all the stores that will sell the PS3, the site also has a list of all midnight release locations and auction listings. They have recently added the Target chain to their list and are working on adding chains like Circuit City to their database.

1. PS3 release locations in your area