EA Sports is changing their process to select the cover athlete for Madden NFL 12. They are letting you, the fan now vote for the cover. In this process, EA Sports launched a 32 man tournament bracket with one representative from each of the 32 teams in the league. Over a period of five grueling rounds, with each round lasting a week, fans can narrow down the field until only one option remains – the cover for Madden NFL 12.

EA Sports has tried multiple methods previously to choose its cover athlete for the Madden NFL series. Three years ago, they picked a retired player (supposedly) in Brett Favre. For Madden 10, they picked two players for the first time in Larry Fitzgerald and Troy Polamalu. Last year, the players chose from three finalists with Drew Brees winning the top honor. 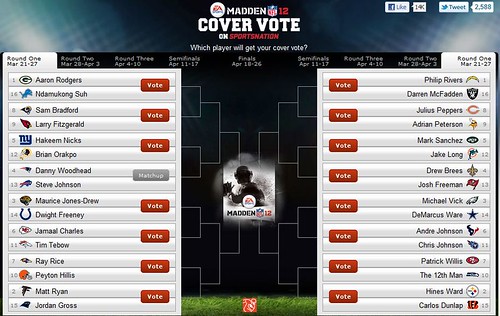