The Caffeine Divas : Bow down and worship, the high priests and priestesses of Temple Caffeine will now hear your prayers.

It’s 25 below zero, 5 a.m. and pitch dark. The streets are silent besides the crunch of my coffee-stained sneakers on the snow. Is this a bad case of somnambulating? A meditative moment in the winter wonderland? The last resort after a failed all-nighter?

No, I’m just on my way to work at the coffee shop in Northfield, MN, home of Carleton College. 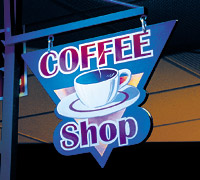 Goodbye Blue Mondays is where students, professors and locals gather to sample the best warm beverages and exchange conversation in an atmosphere of intellectual and social stimulation rivaling and reminiscent of Parisian salons in the 1920’s.

For the early morning opening shift, I brew eight airpots of coffee, put freshly baked scones and muffins in baskets, bring the New York Times in from the snow-covered entryway and wait for the regulars to come for their first daily dose of caffeine. I foam milk madly, pump to go’s and for-here’s, and make myself the perfect cuppa Joe. And as the day wears on, I hear the clink, clink of quarters piling up in the tip jar. Ahhh, the life of a coffee shop diva.

But, are a few handfuls of sweaty coins divided between all the divas on duty enough to draw students to coffee counters nationwide, begging for work? What makes coffee shops such desirable workplaces? The preponderance of crossword puzzles, Scrabble and chess? Debates on Hegelian dialectics, Thomas Pynchon’s postmodernist revisionism and Virginia Woolf’s early example of the gender-*uck? The beloved, and perhaps physically necessary, combination of coffee and cream (or faux cream)?

My theory is that the coffee shop is a version of home, and that seems to be the first step in attracting so many folk to work in them. The summer before I worked at Goodbye Blue Mondays, my off-campus house had burned and wasn’t habitable when I returned to school. I camped out in the backyard and adopted the coffee shop as my second home. Many others do this too, less out of necessity than choice.

Support progressive coffee shops featuring soy milk and organic and shade grown coffees. Shade grown coffee is grown in clusters interspersed with other trees and plants rather than in typical monocultures. This method deters plagues and blights that affect monocultures and supports the habitat of many tropical birds that cannot live in large monoculture plantations. (This will become an increasingly interesting issue as both Honduras and Nicaragua try to replant coffee to replace what was destroyed by Hurricane Mitch.)

Plus, as an coffee house employee, you interact with cool co-workers, interesting drop-ins and devout regulars. Sam, a Brown University student on a year off who works at Cafe Pamplona near Harvard University, spends his working hours eavesdropping on titillating bits of conversation. He makes his lattes to the tune of a Cornel West debate and washes dishes to the stories of Josefina, the 84 year-old owner of the dark, smoky coffee shop. In the 60’s Josefina kicked out Janis Joplin and her boyfriend for being drunk and rambunctious. Other coffee shops, while not as old and established as Cafe Pomplona, have their own interesting stories and attract the stimulating conversations of students, artists, thinkers and the average coffee drinkers. 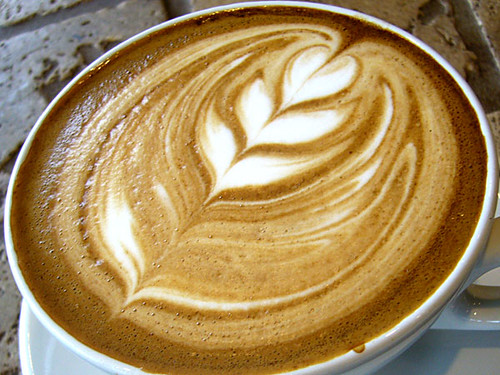 Anne, a Tufts University student who used to work at The Someday Cafe, the hotspot in Davis Square, Somerville, Mass., likes the relaxed atmosphere of the place. As with most college-oriented coffee shops, hours are flexible to accommodate a student schedule. “And you can play your own music,” she stresses, with Bob Marley singing sweet melodies pure and strong in the background. “There’s no behavior code, you don’t have to dress up and you can do what you want.”

Most importantly, you don’t have to put on a forced personality. At places like Starbucks, they suffocate employees and turn them into drones (who receive health benefits and stock purchase options). It’s true that at most cool, independent coffee shops, there is a lot of flexibility but no benefits package. Polly, at Curious Liquids, an artsy, salon-esque coffee shop in Boston, says that even though it’s a service job, “it’s so much better than retail.”

It seems that coffee shops attract people who can’t display the syrupy, fawning charm that other sales jobs require. Anne says, with a wry smile, that people at The Someday Cafe are sometimes brusque to customers but it’s all part of the take-it-and-like-it personality of the place.

But, are atmosphere and mental stimulation enough? Coffee shops are not well known for their generous wages, which can be anywhere between $5 to $9 an hour. To many, however, the pay is enough to offer a decent supplemental income, and the tips are instant cash. Once you know the regulars and can make their drinks between the time you spot them coming in the door and the time they reach the counter, you’re part of the coffee shop elite. Then you start making tips that leave the tip jar weighty and more silver than copper. Thanks to the woman who ordered a non-fat half-caff double mocha with extra whipped cream and a straw and the man who ordered a Depth Charge everyday at 6 a.m., I paid for my entire spring break road trip to Utah and Colorado, with a paper lunchbag full of change.

If it’s not the money that’s appealing, there’s the free coffee and food. Most places allow workers eat and drink whatever they want (from the store) while they’re working, and at a discount when they’re not. For me, this meant many a free meal and a dangerous bout with the somewhat inadequate carbo-caffeine diet. But, it’s free food, and what’s better than eating it than giving it away? Deke Harris of Carleton College describes this feeling as karmatically beneficial: “It makes you feel good, makes them feel good.” All around karmic benefit for friends and strangers alike.

Much as the coffee shop divaship is a precious thing, there do lurk distasteful elements. There will inevitably be drunken patrons who generously leave their regurgitated mark on the bathroom floor. You will become an expert in the art of mopping and toilet plunging, not to mention parading a cloying sweet milk smell and modeling the latest in creative coffee stains. You will also likely acquire, if you don’t already have, a lovely caffeine addiction to keep you coming to work for your fix.

To get the coveted coffee shop job, follow these tips: Choose your favorite place and hang out there. Then, become a tipping regular and get to know the staff who work there. In many places this is the only way to ‘get in.’ Polly said she ‘got in’ to Curious Liquids because she had been a regular and knew someone who already worked there. Now that she’s “in,” she gets to participate in the review process for new employees. The applications include questions like “who’s your favorite cartoon character?” and others that cut to the quick of personality and style. A job offer depends as much on the answers to these questions and the opinions of the current workers as on experience and flexibility.

So, you want to become an espresso snob, a goddess of the mop, a social butterfly genus lepidoptera relaxedus capuccinus? Sounds like you’re on your way to karmic benefits.