But now, summer means a mad scramble to find a job. Some students seek internships with prominent corporations, honing valuable photocopying and filing skills in high rises across the country. Others return home, paying bills by working in retail or perhaps the expedited food service industry. Many students, though, are drawn like moths to the fluorescent lights of research laboratories. 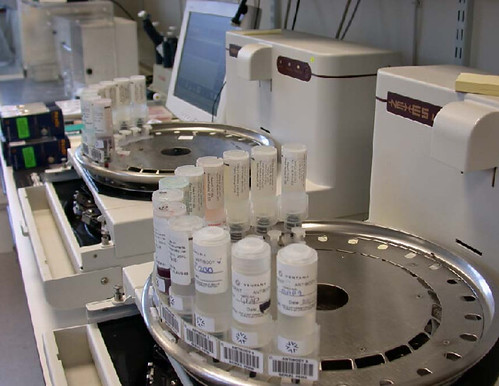 Working in lab may or may not be the most exciting, entertaining or stimulating job, but it does pay pretty good. The rewards of lab work are measured differently. Not only do you get unprecedented autonomy in a summer job, not only can you take part in cutting edge research that might cure the most devastating diseases on the planet, you also get an unlimited supply of rubber gloves. Cool.

Surprisingly, there’s a wide variety of jobs available in laboratories. The term “lab” is roughly equivalent to “business” in that it incorporates hundreds of different pursuits in one word, (albeit a shorter one with fewer s’s). Students doing lab work could be unraveling the mysteries of DNA, working on the cure for cancer or studying the pigments in a Monet. Sounds a hair more enticing than photocopying, right?

The first student I talked to was Nathan. Nathan was part of a team attempting to convert anthrax toxin into a magic bullet to target and attack diseased cells in the human body such as cancer cells.

First, a little background on this amazingly cool project. The anthrax toxin is composed of two basic parts: a toxin (bad) and an injector. When proteins in the injector align, a hole forms and the toxin enters the targeted cell. Schmitt’s group hoped to replace the lethal toxin with a therapeutic compound. Essentially, the converted anthrax toxin would work as a mini hypodermic. It would be injected into a diseased person (by a big hypodermic) and the treatment would go throughout the body and wipe out diseased cells. Nathan was in charge of figuring out how the protein changed shape during the injection.

Although he checked in with a mentor occasionally, Nathan designed experiments and was his own boss. Instead of worrying about someone peering over his shoulder the entire time, he could make his own decisions and act on them. There was one definite drawback to Schmitt’s research, however. In social settings, whenever Schmitt mentioned he worked with anthrax, people tended to flee.

Another researcher, Chris, who requested that only his first name be published, worked with rats to discern how learning and memory function. He injected a protein responsible for memory into different regions of the rats’ brains and monitored how the rats’ memory was affected. His first shock in lab came when his co-workers handed him one of those Black and Decker 2000 function tools and asked him to drill into a rat’s brain for an assay. Apparently that was function number 1789.* But Chris used other tools as well.

“I almost had to draw the line,” Chris said, “when they handed me a pair of scissors and told me to cut the rat’s head off … almost.” Chris also enjoyed a remarkable amount of freedom in his research, conducting his experiments as he saw fit. 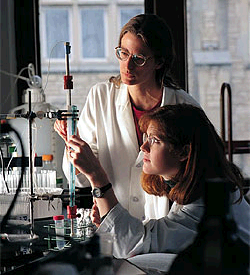 For the most part, lab supervisors assume lab workers are intelligent enough to use their own brains. It seems a logical assumption, but for some reason the heads of other internships and summer jobs don’t seem to make the leap. As with Schmitt’s job and the Force, there was a dark side to Chris’s work. For some odd reason, working around bottles filled with live herpes viruses made Chris nervous. Now Chris washes his hands eight times a day and refuses to eat anything his hands have touched directly. He’ll eat almost an entire burger but leave the last bit of the edge where his fingers were touching.

Not all lab involves threatening microbes, however, as proven by the work done by Diana Birkett, Harvard ’99. Birkett works in an art conservation lab deciphering the pigments used in various pieces. By constructing a color palette for an entire piece, Birkett makes it easier for museums or concerned patrons to restore works of art that have faded with time. Birkett noted that, “While it’s sometimes difficult to find work in a non-traditional lab setting, it is incredibly rewarding to be able to work in a field that I love.”

Finding a lab job, especially one that you will love, can be difficult indeed. The quickest route to finding work in a lab is to consult your college’s student employment Web site or office. Another way to get into a particular lab is to simply talk to someone in the lab and ask about employment opportunities. Feel free to talk to professors about their work if it interests you. Even if the people you talk to can’t offer you a job, chances are that they will know of another lab doing similar work and give you the name of someone to talk to. Nathan got his job through just such a referral. Scientists, like people in any field, are flattered when people express sincere interest in their work. Do your research, know what you want to work on, and go kill some rats. Or talk to people. Either way works, although the latter is more likely to result in gainful employment.

For some reason, premedical students insist on working a lab job. It is seen as a necessity for getting into medical school, right up there with the MCAT and strategically sent fruit baskets. Even the head admissions officer at Harvard Medical School swears that labs are not a necessary component on applicants’ resumes. Counselors and premedical advisors at Harvard echo these sentiments. The thing that everyone must understand about lab work is that, while it affords unparalleled intellectual challenges, it can also be very, very tedious.

If you have a passion for the work, however, then lab work can be one of the most rewarding experiences of your college career. While working to save the world, you get to pad your resume with a job that gives students autonomy, a sense of purpose and even neuroses. How many summer jobs can you say that about?