Students are deluged with credit card offers, some worthwhile and some not. Here’s what we discovered about the world of credit. 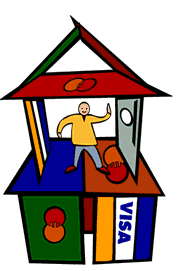 House of Cards Visa is “everywhere you want to be” and Mastercard is “the future of money,” according to their ads. But for many college students credit cards may be in too many places, and the future can include high debt that cripples credit ratings and erases eligibility for loans.

Credit card company data shows more students possess credit cards than at any other time in history, and students are using their cards with increasing frequency. That’s good for everyone: students gain convenience, the credit card companies build future customer bases and merchants sell more goods and services. But both sides also have a lot to lose if the students who spend, spend, spend today are unable to pay, pay, pay tomorrow.

With credit card companies aggressively targeting the college market, the convenience and buying power of credit cards are readily accessible to most students. However, not all students who receive credit cards realize the responsibilities that go with them.

For Ron Nixon, a student at John Jay College in New York, having credit available all the time proved disastrous. After ringing up $10,000 in debt, Nixon was forced to leave school to pay off his balance.

“The first credit card I had was the beginning of the end. That one led to another card, and then another and another. Eventually I had 19 credit cards,” Nixon said.

What Nixon didn’t realize is that a credit card is essentially a pre-approved, rolling loan that you can use to purchase any number of items. The credit card company lets you charge up to your loan limit, and then you have to pay it back. If you can’t, you’ll pay a very high rate of interest — often 18 to 22 percent a year for students.

Tips for Selecting a Credit Card

Shop around for the best deal.
A guy on campus with a folding table and a clipboard may be the most convenient way to apply for a card, but not the smartest. The more time you spend looking now, the better chance you will find a card that saves you money later.

Keep just two cards: one for regular use, another for large purchases or emergencies.
The more cards you have, the more likely you are to use them. A free T-shirt or prize you get for applying is rarely worth the temptation the card will create when it’s in your wallet.

Cards that offer usage benefits require spending more than you would normally to get the benefits.
A small percentage of what you spend will be credited toward your benefits (such as a car, frequent flyer miles, cash back). You may have to spend thousands of dollars on a single card before you reap the advantages.

Pay off as much of your balance as you can afford every month.
Making only the “minimum payment due” leaves you owing more and paying more in interest.

Self-control and common sense should prevail.
If you can’t afford something, don’t buy it. Even small purchases such as CDs or eating out add up over time.

Don’t be afraid or embarrassed about getting help.
Everyone, your parents, your school, even the credit card companies, want you to be able to pay off your bills and have a good credit history.

These cards are meant to be a convenience, not a crutch.
If you find yourself dependent on credit cards to meet your living expenses, it may be time to reevaluate your financial situation.
Nixon’s case is an extreme one, but it illustrates the most common problem faced by students with credit cards: overextension. Multiple cards lead to more spending and escalating debt. Many students have more cards than they need because of incentives offered by credit card companies for students to apply.

Matt Shlager, a senior at Northeastern University, said he believes that students often apply for cards simply for the free merchandise.

“They offer free stuff, and lots of people apply for the card just to get it, planning to throw the card away when it comes in the mail. But when it does come, and that letter tells you how much money you can spend with that card, it’s hard to cut it up,” Shlager said.

“I know plenty of people with credit cards. Some of them use them intelligently, but most do not.” Martis said. “Some people I know don’t seem to make the connection between buying things they want all month, and that piece of paper that comes in the mail on the first of the next month saying you owe money to Visa and Mastercard.”

College administrators say credit card debt is becoming a big issue on campus. Andrew Wayne, who was an assistant director for financial aid at the University of Arizona, said debt is afflicting students faster than ever before.

“I worked with college students for almost ten years. When I started, credit card debt was not an issue we ever concerned ourselves with. Lately, it can be a major reason students have problems getting loans. You can only owe so much before people will stop lending you more,” Wayne said.

Credit card companies are quick to defend criticism of their policies towards college students. A Visa USA Inc. representative told the House of Representatives banking subcommittee in 1994 that the company’s “efforts in marketing credit products to college students is a way of building brand loyalty. Indeed, college students particularly benefit from credit cards because such cards enable them to time important purchases, such as books and tuition, rather than have such purchases subject to available savings or cash flow.”

The major credit card issuers know they’re giving students a lot of leash when they send that pre-approved card with the $1,000 credit limit. It’s testimony to the companies’ concern that they have information online that’s tailored for students explaining concepts like debt management and personal financial planning.

Sean Healy, a spokesman for Mastercard International Inc., said that college is the time to experiment with credit so students establish a credit history, which can be used in the future to justify your ability to purchase a car, a major appliance or even a house on credit.

“It’s critical for young adults to be able to build a credit history…and we play a valuable role in that,” Healy said.

Mastercard has also begun an advertising campaign which warns college age consumers of the heavy debt loads that can result from misusing or abusing a credit card. Mastercard said the campaign is designed to “raise consciousness among 18-24 year olds about the realities, importance and implications of establishing a positive credit history through responsible credit card use.”

Colleges are increasingly providing services to help students such as Ron Nixon. After all, it’s in a school’s best interest to keep students in class and paying tuition. And since approximately 77 percent of students depend on loans in one form or another to pay tuition, having people on campus who can help students work through the pitfalls of personal finance is crucial.

The majority of schools looking at the credit card issue are attempting a proactive approach. Instead of focusing on helping students who already owe creditors, schools are trying to help students keep themselves out of serious debt.

The University of Washington experimented with several approaches to counseling students who were at risk for big debt. It recently canceled debt management seminars because they were poorly attended, and placed more emphasis on counseling students in other settings. Eric Godfrey, the assistant vice president for student affairs at U.W., praised the new approach. “Previously, attendance was spotty at best. Now our approach is a little less formal and more on a one-on-one basis.”

Lehigh University also offers help to students with credit problems. William E. Stanford, the director of financial aid at Lehigh, said the students who most need help sometimes don’t ask for it.

“It is a very difficult thing to get into, because before young people have gotten into trouble with credit, they believe they are too intelligent to be threatened,” Stanford said. “The ones who really do get into trouble get sufficiently embarrassed by it that they don’t come forward to get help.”

“Part of our focus is to make sure parents are aware that this is something that is going to happen to their children — that they will receive mail and solicitation that will give them opportunities to have credit cards,” Downing said.

Some schools, such as Northeastern University in Boston, Tufts University in Medford, Mass., Widener University in Chester, Penn., and Rollins College in Winter Park, Fla. have banned credit card companies from soliciting on their campuses.

“We are trying to eliminate the hard sell on our campus,” said Janet L. Hookailo, a Northeastern spokeswoman.