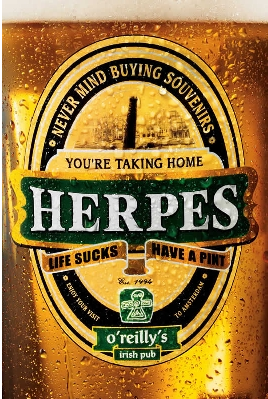 It’s not a pleasant topic, but if you’re sexually active you need to know about herpes. It’s one of the most common STD’s contracted by adults.

“There are two forms of the herpes virus,” says Chris Baptiste, R.N., a nurse at Wilmington Health Center in Wilmington, MA. “Cold sores or oral herpes (HSV-1) appears on or around the lips, while genital herpes (HSV-2) generally appears below the waist on the genitals.”

Planned Parenthood explains that cold sores are common in young children, who can contract them from exposure to active cold sores of adults and other children. Emily Watson*, a senior at Norwich University, has had HSV-1 (oral herpes) since she was a young child. “I can remember having ‘cold sores’ as young as four or five,” she says. “I am not sure where I was exposed to the virus, but as I have gotten older the outbreaks have not been as bad.”

Obviously, genital herpes has different symptoms than its slightly less offensive oral counterparts. “The patient will feel an initial tingling in the area where the lesion is going to appear,” says Lenny Sinclair, R.N., a nurse at Burlington Medical in Burlington, MA. “It is usually followed by pain. The virus lies in the nerve root and produces painful lesions.”

An individual’s first genital herpes infection is known as primary herpes. Symptoms include:

Other symptoms of primary herpes may include:

If you notice these symptoms, you should see a doctor as soon as possible.

“Recurrences can be triggered by a variety of things,” Baptiste notes. “Cold sores can be caused by stress or a compromise in the immune system.”

“I tend to get cold sores in the winter,” Emily says. “The cold triggers attacks. I also catch colds and the flu more often in the winter. A majority of [cold sore] outbreaks are during or after an illness.”

To suppress outbreaks, patients can take oral medications or apply topical creams directly to the lesions. Planned Parenthood tells patients that small daily doses of acyclovir, famiciclovir, or valacyclovir may reduce the frequency of outbreaks.

“Anti-viral medications can suppress the virus,” Baptiste says. “But they do not get rid of it. Medications can only lessen the severity of the outbreak, not cure it.”

“I have an acyclovir ointment that I use on my oral herpes,” Emily said. ” I use the ointment three to four times a day and the blister goes away faster than when I don’t use it.”

Since there is no cure for herpes, it is important to use condoms when having sex to reduce the risk of contracting or spreading the disease. “I don’t think most people are aware of how easy it is to contract herpes,” says Mike Forrester*, a sophomore at the University of Massachusetts. “They know it exists but they just don’t think it could happen to them.”

If a blister is present above the reach of the condom, however, the virus can spread. It is important to be honest about your sexual history with your partner — whether you have herpes or not.

“I think some people lie about their sexual history,” Mike says. “They are embarrassed to admit they have an STD because they are afraid of rejection. But what they don’t realize is they are endangering themselves and their partners by not being honest.”

*Some names have been changed.