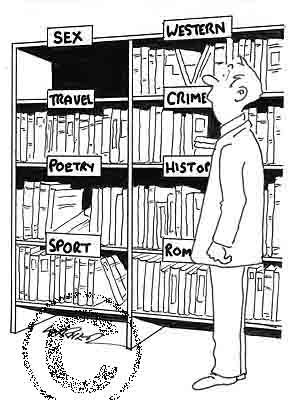 Dewey Seximal System: More and more students are going to the library, looking up catalogue number 69 and boning up on some human reproductive biology.

Yale University gained notoriety in the last decade when the “freshperson” issue of the Yale Daily News called on new students to think of its library “first as a place of study, but second as a kinky haven of intercourse.”

Half a world away at Stirling University in Aberdeen, U.K., a Press and Journal article called sex in the college library “the latest craze,” noting it had become so notorious cartoons on the subject are featured in the university newspaper.

“It’s going on all the time,” Sara, a 23-year-old biology major, told the Press and Journal in January. “My boyfriend and I are regular library goers.”

But is fornicating in the aisles of knowledge a college ritual or simply a time-honored university legend? According to a survey published in “Esquire,” out of 1,000 college students surveyed, 10 percent risked reprimand or expulsion to commit an assortment of lewd acts in the library.

“It definitely happens, but even one time is too much for me,” said George Kingman of University of Oregon , who says the intellectual sanctuary of a library should be respected like that of a quiet medieval church, but sometimes isn’t.

That may be because couples, unlike flashers who often want to be noticed, are discreetly getting some without getting caught.

As an Oregon junior, Rebecca Bartly said she and her boyfriend once had sex in a remote corner of the library.

“My boyfriend and I were both in the library one night,” Bartly remembered. “I don’t know if it was the thrill of getting caught, but we both got hot-and-bothered thinking about it.”

When Bartly and her mate discovered a suitably private spot, they couldn’t resist the thrill. “The room we were in had a lock, but we didn’t use it,” she said. “I was so worried someone would come in. It was definitely thrilling.”

Even Jesuit and catholic colleges aren’t immune from depravity. At Gonzaga University in California, students report widespread use of the conference rooms for more than reading.

“While I was at Gonzaga University, I heard from friends that oral sex in the library study rooms was quite popular,” said a Gonzaga grad. “You wouldn’t think that nice, holy, Jesuit Universities would be hot beds of sin — especially the library — but they are.”

The idea of what thrillseekers are doing in the dark recesses of his library is revolting but not surprising to Shipman. “God almighty, I guess anything’s possible,” he said.

Psychologists say the fear of getting caught is exactly what gives semi-public sex an extra kick that moves some people to take embarrassing chances.

“It’s no different from people who have sex in other public places,” said UC Santa Barbara-educated psychologist, Dr. Joy Lum. “The thrill and anxiety of getting caught can be arousing to some people.”

Sex in the Stacks

Lum said Shipman’s “medieval church” regard for libraries is common as well as the reason it seems so irresistible to some.

“It feels deviant because it’s the antithesis of what you’re supposed to be doing in there,” Bartlemay said.

Mens’ bathrooms in libraries have long been a place for same-sex shenanigans — with some internet sites listing hundreds of college campuses where “male-bonding” can be had. In the early 1990s at Miami University of Ohio, library administrators kept having to refill peep holes that had been drilled in the stall dividers in the men’s bathrooms. Finally, the stalls were patrolled and several men were caught with portable drills feverishly boring through the metal dividers.

And what if you’re caught? A University of Oregon Public Safety officer says as long as the act involves two consenting adults and they are not in plain view and are not minors, it does not constitute a crime. But he said the case could be referred to campus judiciary system, which could lead to suspension or reprimand.

Perhaps only librarians and daring students know how common library escapades are. But Bartly says the combination of college students with raging hormones, the danger of being caught and the rush of deviance will continue to make libraries a place of carnal knowledge.

“There’s some lore in being able to tell people what I did,” said Bartlemay. “There’s just something sexy about libraries.”

Using the libraries for studying is so prudish! At least that’s what we think. Do you have any tales of Bacchanalian lust among the dusty tomes that you want to share with us? And remember — it’s anonymous!