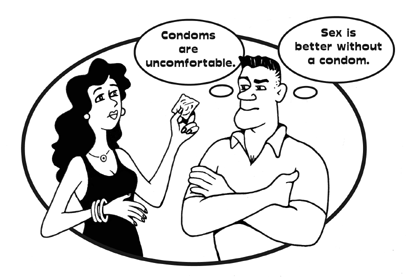 When used correctly, condoms are 98% effective in preventing pregnancy. When used with a spermicide, condoms are 99.8% effective in reducing the risk of a sexually transmitted disease. Those are pretty good odds. One study found using a condom during sex is 10,000 times safer than not using one, according to Monica Rodriguez of the Sexuality Information and Education Council in New York City.

Still, it seems a lot of guys out there try every excuse in the world to get out of using condoms. I’ve probably heard most of them from my ex-boyfriend personally. (Notice I said ex.) Here are some of the most common excuses — and why they make no sense.

I’ll pull out at the very end.

Most people assume all the semen comes out at the end and if they pull out at the pinnacle of pleasure, they’ll prevent pregnancy. However, Rodriguez says, “When the penis is erect, there is a little bit of pre-ejaculatory fluid that is released. This fluid may contain sperm as well as the virus or bacteria that causes STDs.” Also, the probability for pregnancy using “coitus interruptus” (did you know there was a technical term for it?) is 19%. That’s a little too high for my taste.

I’m embarrassed to buy them at the store. 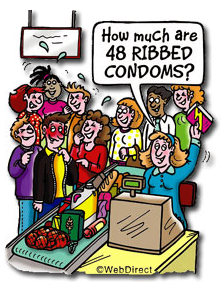 You’re embarrassed to let the pimple-faced clerk making $5 an hour behind the counter know that you’re going to get lucky tonight? Hello!? Stand and be proud! (Or buy them over the Internet if you’re really shy; there’s even a sort of condom of the month club for monthly home delivery.

She’s on the pill.

Yes, the pill is super effective at preventing pregnancies, but that’s it. So unless you’re in a monogamous relationship and you’ve both been tested for STDs, birth control pills aren’t enough. They’re not going to protect you from the three to four million cases of the most commonly sexually transmitted disease: Chlamydia. And they won’t protect you from herpes, gonorrhea or AIDS.

I would imagine that ugly sores of your genitalia would be a bit uncomfortable too, but hey, what do I know? Besides, Rodriguez says there are ways to make wearing a condom feel better:

* Make sure you’re putting it on correctly — not inside out.
* Try different kinds — the different sizes and styles can affect fit.
* Use a water-based lubricant both inside and outside the condom.
* The more you use them, the more natural they will feel.

Stores carry a dizzying array of condoms; finding the right one can be a chore. The lambskin kind protects you from pregnancy, but allows STD viruses to squeeze through. That means latex is the only way to go if you don’t know where your partner’s been. And remember, some of those funny condoms you find in condom stores look really cute but if they’re marked “for novelty purposes only” they’re not going to help you out. Rodriguez suggests you look for condoms specifically labeled for STD and pregnancy protection.

Need more reasons to use a condom? Here are five of the best:

Reason #3: While there are cures for some of the more common STDS out there, think about going to the doctor to ask for medication to cure up the ugly sores on your genitals. And you thought buying condoms was embarrassing!

Reason #5: Willingness to wear a condom shows respect for your partner. Feeling respected makes people happy. And making your partner happy increases your chances of getting in the sack again. Isn’t that really the best reason of all?