According to a survey by Jockey International, most guys, over 46% of them, dread the wedgie as their most uncomfortable underwear situation. Apparently, their high school torments still seem to be fresh in the minds of most adults whose torments didn’t end with their schoolyard bullies or on the playground. 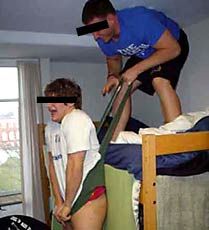 Though not the Atomic wedgie variety administered by drunken members of the JV football team, this self-inflicted wedgie beat out Elastic Stretching Out Too Much (40%) and Scratchy Tags/Tags That Stick Out (36%), to be the number one problem guys battle with their underwear, according to the survey results (Actually wearing “tightie whities” was apparently not considered a “problem” in this survey.)

And when one of these situations occurs, what did guys say was the most embarrassing place to have to “make an adjustment”? According to the survey, most guys (45%) dread doing a little shifting during a job interview. (“We’d love to have you on our team, Bob, but it appears you have a bad case of panty crickets.”) This was followed by Romantic Dinner in a distant second with 21%, (I guess pulling a wedgie out of your crack over some prime rib and Chianti doesn’t bother most guys), and Business Meeting with 18%. At the bottom of the list was Meeting Her Parents for the First Time with only 11% caring if they did a little clean-and-jerk in front of her mom and dad. (Well, if it didn’t bother her over dinner…)

Too few headlines feature the word “wedgie,” and I thank Whittier Vocational Technical High School and the school administrators for helping to rectify that. A few players on the the football team are accused of giving wedgies to younger team members. And since that violates the school’s hazing policy, they’re going to be suspended. One student offered this opinion.

“It’s a harmless thing everybody does and the people in school now all do it. It’s better than doing drugs in school and that’s the truth,” said student Phil Blankenship. “At least they’re not smoking pot or doing crack on the street corner waiting for the bus. They’re just giving harmless wedgies.”

Seriously. It’s the Whittier Vocational Technical High School… what are we expecting from these kids? Administering wedgies is probably one of the more intellectual pursuits that these kids are involved in. If this kid takes it with a smile on his face, then I’m sure that the young Whittier students will be fine.