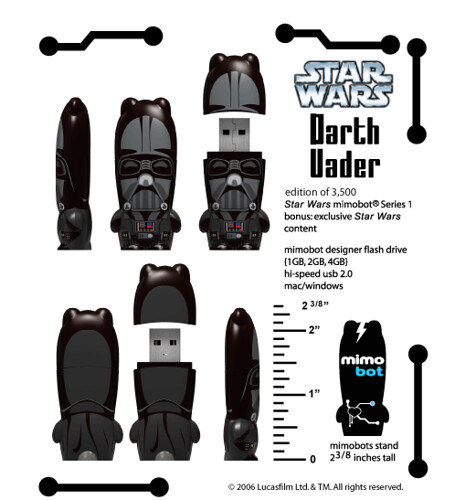 Mimoco, a designer toy studio meets consumer electronics brand based in Boston, MA, in collaboration with Lucasfilm Ltd., has launched a new series of four Star Wars based theme products to its range of Mimobot USB flash drives.

The first in the line of Star Wars drives is the Darth Vader USB Stick, who’s ‘helmet’ can be lifted up to reveal the USB connector. Unfortunately, there’s no hiss out of any nozzles while this happens.

Series 1 of this limited edition mimobot collection, arriving January 2007, includes Darth Vader and Chewbacca who are now open for preorders!

The pricing is as follows:

Now, this price is way more expensive than similar capacity USB flash drives, but these have the force with them. The dark side of the force.