The 2008 NFL season began in the worst possible way for Patriots Nation and football fans. Tom Brady is expected to miss the rest of the season with a torn ACL (Anterior Cruciate Ligament) in his left knee, according to Michael Silver of Yahoo Sports.

Tom Brady was hurt early in the first quarter against Kansas City Chiefs when he stepped up to make a throw to Randy Moss. At that point, he was stuck by Chiefs safety Bernard Pollard who lunged forward while on the ground and stuck Brady’s leg which in turn buckled it. 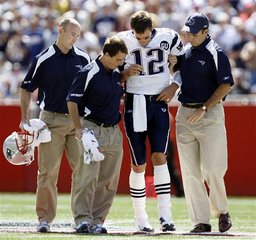 Tom Brady was replaced by Matt Cassell who may did okay in mop up duty but is this season over for Patriots fans?

1. Peter King from Sports Illustrated could not confirm the severity of Brady’s injury but say it could certainly put the rest of Patriots season “in jeopardy”

2. Word around the New York Jets locker room is that Brady suffered a torn ACL looking at the tape of the game and play and are already preparing to play the New England Patriots next week without Tom Brady

3. Chris Collinsworth reported on NBC’s Football Night in America that he was in touch with the NFL league office and the league has already determined that there was nothing illegal or dirty in the play by Pollard