We showed you how to host the perfect party, make your own top drinks at parties and also, how to host a wine tasting party. Now, after the fun, here are tips and suggestions on how to cure a hangover… 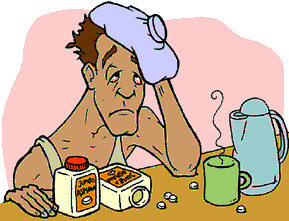 A dead scientist once made the profound discovery that for every action, there is an equal and opposite reaction. This is true in physics, and it can be applied to most every other aspect of life — including drinking. Here’s an example:

End of the Year as We Know It Action: A night of carousing, including a couple Long Island iced teas, several Jell-O shots, a vodka/Kool-Aid mix, several Moonshine shots (Mississippi and West Virginia only) and a bottle of champagne, all chased by a six pack of Bud Light.

Assuming you make it to a sleepable surface unscathed, the too-familiar feeling that someone is sawing your skull in half as punishment for the previous night’s alcohol intake. In the worst cases the stomach refuses to keep food down, concentration on the simplest things is an impossible task and the only possible activity for about 12 hours is sitting in a dark room watching The History Channel with the volume turned all the way down.

In this case, the reaction is a hangover, alcohol’s evil — and usually late-arriving, alter-ego. 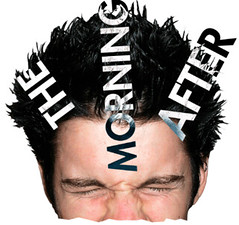 Everyone also has their own “miracle cure” for hangovers.

Whether it is drinking orange juice before bed or coffee in the morning, everyone knows how to take care of a hangover. But will anything really prevent and/or cure the dreaded hangover? Much as everyone hates to hear it, no.

There is only one method by which one can completely avoid a hangover, and that is the one no one ever wants to hear: Don’t drink in the first place. If that’s not a viable option for you, there are a few things you can do to make your hangover less severe.

The Global Hangover Guide suggests drinking two spoonfuls of olive oil before drinking. This is supposed to work by preventing alcohol from entering your bloodstream. But that leaves all the alcohol you drank for naught (if getting drunk is, in fact, your objective.)

If you skip the oil and drink to get drunk, keep in mind the popular ” liquor then beer and you’re in the clear, beer then liquor and you’ll get sicker” mantra. The carbonation in beer speeds the body’s absorption of alcohol, so drinking beer then liquor would cause the latter to be absorbed at a faster rate than it would normally, leaving you sicker. Plus, we drink liquor faster than we do beer, which is more filling. So, switching from beer to liquor is likely to speed up your rate of liquor consumption after you’re already halfway towards being in the bag.

Other ways to ease your hangover can start as late as the morning after a night of carousing, though the earlier you start, the better.

Top 10 tips to cure a Hangover

The most important remedy is quite simple: Rehydrate your body. Whether it’s water, orange juice, 7-Up or chicken soup, fluid is essential to speeding your recovery. Add some lemon to sooth your stomach when drinking the water

Another thing to do is eat, even if you don’t feel like it. The alcohol you drink takes a toll on your body. Your body has exhausted its resources in processing the alcohol and you need to get nutrition of some kind.

Coffee doesn’t hurt either, but be careful because too much caffeine is a recipe for dehydration. So if possible, stay away from it even though it seems like a good idea.

One other highly recommended solutions is to drink Gatorade or Powerade or something similar.

Slices of plain toast have been known to work wonders on some people. Others are willing to swear by the burnt toast. The reason: burnt toast has carbon (excess) in it and that in turn will absorb the alcohol.

There are even companies that market hangover cures. One of them, Pharb, touts itself as “The Ultimate Hangover Relief.”

There is nothing better to cure that headache than pop an over the counter painkiller such as Asprin or Tylenol.

Finally, after you take of these, say drink plenty of water with lemon, eat a burnt toast and take some Asprin, go back to bed and sleep in. Your body will eventually recover.

As a general rule, hangovers suck. And of all the remedies floating around the Internet and college dorm rooms, none are perfect. The hangover, however awful, is the price you pay for drinking too much. Just make sure you don’t get hooked on The History Channel.

Ryan Ferone likes a combination of chicken soup, a burnt toast and jelly donuts to cure his hangovers.