The New Seven Wonders of the World

The Taj Mahal received the highest number of votes for the New Seven Wonders of the world list. The Taj Mahal is considered to be the eternal symbol of love. It was built by an Indian Emperor Shah Jahan for his wife Mumtaz Mahal who died while giving birth to their child.

The Taj Mahal was completed in 1648 and was built over a period of 16 years with workmen and sculptors from all over the world lending their hand to this massive project. The finest material like the Marble, the Jade, Crystal, turquoise was sourced from all over the world. Nearly every inch of the 55 m tall Taj Mahal is decorated. This symbol of love is visited by more than 3 million people all over every year. 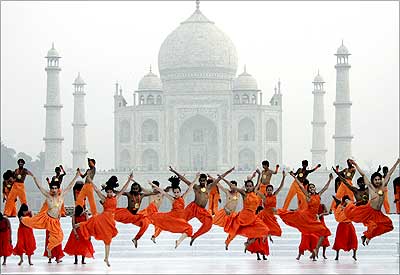 The Coliseum was one of the first monuments to get a confirmed spot in the list of the New Seven wonders of the world. You probably saw the Coliseum in Gladiator and many other popular Roman movies. The Coliseum was built by Roman Emperor Vespasian where work began in 72 BC and took about 10 years to complete.

The Roman Emperors used the Coliseum to stage war games and entertainment where Gladiators used to fight in the re-staging of famous battles, animal fights etc often paying with their lives for the entertainment. At its heyday, the Coliseum could seat upto 50,000 people. 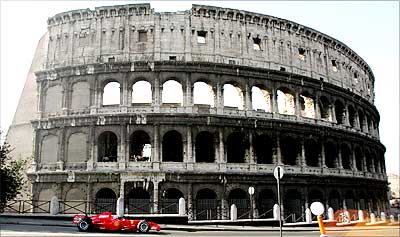 Image: A Formula One Ferrari cruises past the Coliseum. Photograph: Andreas Solaro/AFP/Getty Images

#3. The Great Wall of China, China 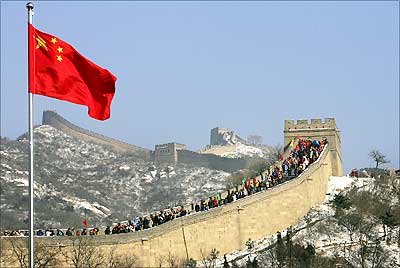 The statue of Christ was unveiled in 1931 and is locally called Christo Redentor. It has become a symbol for the city of Rio. The Art Deco-style Christ Redeemer statue towers atop the Corcovado mountain overlooking Rio de Janeiro. The statue is 125 feet (38 m) tall, including the pedestal and stands on the 2,300 ft Corcovado hill, which along with Sugar Loaf mountains towers over the Rio harbour. The pedestal contains a chapel large enough for 150 worshippers. 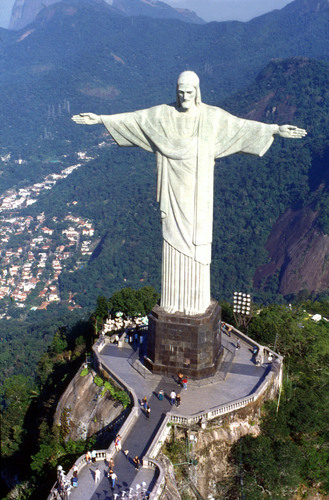 Machu Picchu (IPA pronunciation: [‘mɑ.tʃu ‘pik.tʃu]) is a pre-Columbian city created by the Inca Empire. It is located at 2,430 m (7,970 ft) on a mountain ridge. Machu Picchu is located above the Urubamba Valley in Peru, about 70 km (44 mi) northwest of Cusco. Forgotten for centuries by the outside world, although not by locals, it was brought back to international attention by archaeologist Hiram Bingham in 1911, who made the first scientific confirmation of the site and wrote a best-selling work about it.

Machu Picchu is probably the most familiar symbol of the Inca Empire. Often referred to as “The Lost City of the Incas”. The site was designated as a World Heritage Site in 1983 when it was described as “an absolute masterpiece of architecture and a unique testimony to the Inca civilization”. 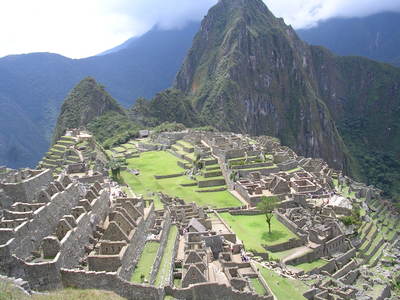 Chichen Itza (IPA pronunciation: [ˈtʃi.tʃɛn.ˈit.sɑ]) (from Yucatec Maya chich’en itza’, “At the mouth of the well of the Itza”) is a large pre-Columbian archaeological site built by the Maya civilization located in the northern center of the Yucatán Peninsula, present-day Mexico.

This famous and sacred Mayan site, located in the Yucatan peninsula in southern Mexico, is about one thouand years old and showcases the Mayan-Toltec civilisation. The Kukulcan temple, also called El Castillo and the Temple of the Warriors, are both focal points of Chichen Itza. The word Chichen Itza means at the mouth of the well of the Itza, which seems to indicate its location near a limestone swallow hole (depression filled with water). 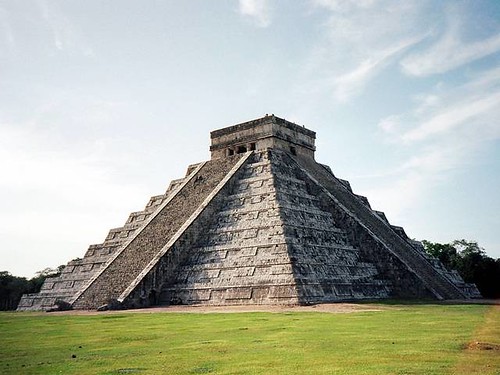 Petra (from πέτρα “petra,” rock in Greek; Arabic: البتراء, Al-Butrā) is in Jordan, lying in a basin among the mountains which form the eastern flank of Arabah (Wadi Araba), the large valley running from the Dead Sea to the Gulf of Aqaba. It is famous for having many stone structures carved into the rock. The long-hidden site was revealed to the Western world by the Swiss explorer Johann Ludwig Burckhardt in 1812. The site was designated as a United Nations Educational, Scientific and Cultural Organization World Heritage Site in 1985 when it was described as “one of the most precious cultural properties of man’s cultural heritage.”

The Nabataean ruins, carved in the steep rocks at Petra, lie in a valley between the Dead Sea and the Gulf of Aqaba. Once the capital of a sect of cave-dwelling Semites, who spoke Aramaic, located on an early caravan route to Gaza, the Persian Gulf and Damascus, Petra was a flourishing city. 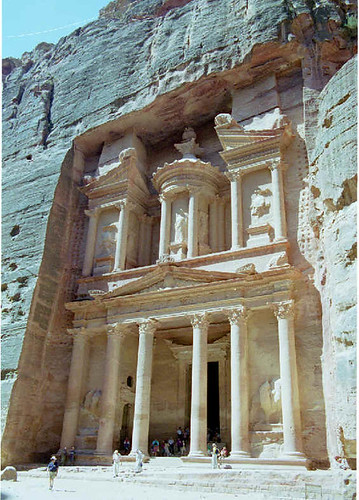