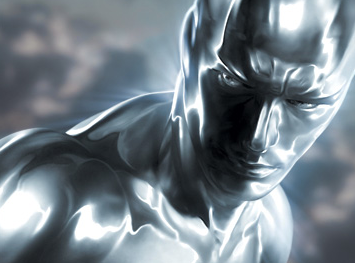 The Silver Surfer’s is easily one of the greatest villain-to-hero epics in the Marvel universe.he trailer debuted over the weekend with Night at the Museum; it won’t make it online in beautiful Quicktime/HD until Fox releases it, probably sometime this week.

The Rise of the Silver Surfer continues the adventures of the Fantastic Four. The release date for this movie is set for June 15th 2007.

Based Upon: This is the sequel to the 2005 superhero hit, Fantastic Four, which was of course based upon the long-running Marvel Comics title once subtitled “The World’s Greatest Comic Magazine.” Specifically, the premise of this movie is loosely based upon “The Coming of Galactus” in FF #48-50 (1966), which introduced the cosmic characters of the Silver Surfer and Galactus. This movie may also pave the way for a future spin-off movie for The Silver Surfer, whose own movie adaptation has been in development nearly as long as the Fantastic Four’s has been.

Watch the brand new trailer below